When Should I Replace My Tires 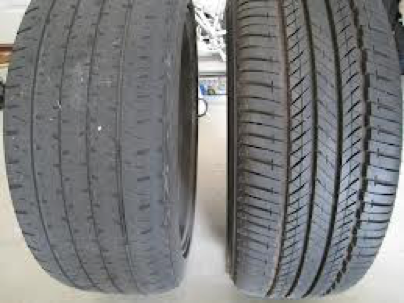 When Should I Replace My Tires?

While your tires are often one of the most neglected parts of the car, they are arguably one of the most important when it comes to your safety. The NHTSA reports that more than 11,000 tow-away crashes occur every year related to tire issues. We thought you would be interested to know what factors we use to determine when your car should get new tires.

While it is simple to place a Lincoln penny in the tread groove of a worn tire and use Abe’s likeness as a guide, we don’t think Honest Abe knows what’s best for today’s drivers.

The Lincoln penny tread depth test has been touted for years to be a suitable method of determining when it’s time to get new tires. It’s based on the premise you’re driving on legal tread depths anytime the top of Lincoln’s head is obscured by the tread and that a tire’s ability to grip the road isn’t greatly reduced in adverse conditions (rain, slush and snow) until the tread wears to about 2/32″ of remaining depth. It then maintains you’re ready for new tires at 2/32″ and can see the penny above Lincoln’s head. 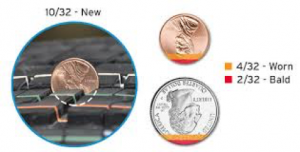 Is it as simple as that? No. Read on.

A driver’s ability to control their vehicle depends on the traction between their tires and the road. Tires don’t require tread designs or even much tread depth to deliver traction on dry roads. A practical example of this is the racing slicks used on stock cars and open-wheel racers that provide traction at over 200 mph. However, tires do require tread designs to generate traction on wet, slushy and snow-covered roads. Liquids can’t be compressed and require time and energy to move them out of the way as our tires drive through them. Those same racing slicks would lose traction at amazingly slow speeds anytime something prevented them from maintaining contact with the road.

So a tread design is necessary to direct water and slush from between the tire and the road, as well as provide edges that bite into snow. But that’s only half the equation; because we’ve seen that tread depth also contributes to how well the design does its job.

The air our tires encounter at highway speeds can easily be compressed and moved out of the way with relative ease. However the same isn’t true of liquids. When water collects on the road surface during rainstorms, the water depth, vehicle speed and vehicle weight, as well as the tires’ tread designs and tread depths collectively determine when and if the tires will be forced to hydroplane and how quickly they can stop a vehicle.

A typical passenger car tire has about twenty square inches of total footprint surface and begins with about 1/3″ of tread depth. While the majority of the footprint surface is made up of the rubber that grips the road, the remainder is the void of the grooves that make up the tread design.

Obviously the tread will wear away over the life of the tire and the volume of its tread grooves will be reduced. While this occurs so slowly that it may not be noticed day-to-day, ultimately there will be a time when the driver will notice the car slip in the snow, hydroplane in the rain or simply not stop in as short a distance on wet roads.

In order to confirm how much wet traction worn tires sacrifice, a test team measured the stopping distances from 70 mph (the typical speed limit of U.S. Interstate highways) with vehicles equipped with sets of new tires and compared them to tires with about 4/32″ (3mm) of remaining tread depth, followed by sets with the legal minimum of 2/32″ (1.6mm) depth. The differences surprised us! Vehicles equipped with the 2/32″ minimum tire tread depth took about 100 more feet to stop and were still traveling at about 45 mph at the same distance the vehicles equipped with the 4/32″ deep tires had already come to a complete stop! 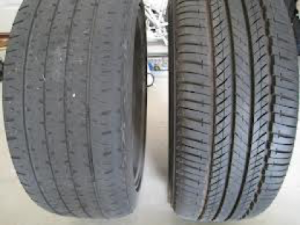 Our advice is that if rain and wet roads are a concern, you should consider replacing your tires when they reach approximately 5/32″ of remaining tread depth to maintain good mobility. You need more tread depth in snow because your tires need to compress the snow in their grooves and release it as they roll. If there isn’t sufficient tread depth, the “bites” of snow your tires can take on each revolution will be reduced to “nibbles,” and your vehicle’s traction and mobility will be sacrificed.

While replacing your tires before they are legally worn out may not appear the most economical practice, it is far less expensive than repairing your car if it can’t stop in an emergency situation in less distance than the vehicle ahead of you!

Another major factor we use in determining when to recommend tires on a customer’s car is the age of the tire. In fact, many people are unaware that every tire is stamped with a DOT code that shows the week and year of its manufacture. The structural integrity of a tire can degrade over an extended period of time. When that occurs, tires are more prone to catastrophic failure, which could, at best, cause an inconvenience, or, at worst, lead to a crash. The degradation of a tire occurs over time, mostly the result of a chemical reaction within the rubber components. That aging process can be accelerated by heat and sunlight. Because of this, many vehicle manufacturers recommend replacing tires when they reach an age of six years, regardless of remaining tread.

Every scheduled maintenance we perform at Automotive Instincts includes a thorough inspection of your tires’ tread depth and age as indicated by the stamped date code, as well as a visual check for cracks, nails, or other factors that could pose a safety risk. After all, its our job to help keep your vehicle running safely and reliably.
*Portions of this article came from “Tire Rack”